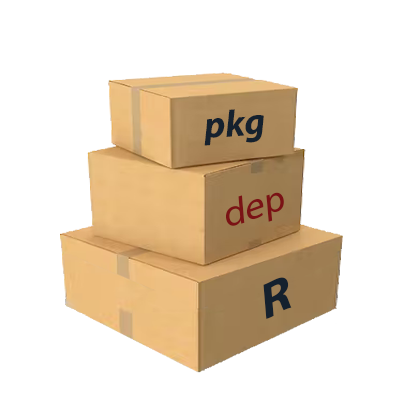 Have you ever wanted to visualize dependencies between functions for a group of R packages you have developed?

{pkgdepR} takes any number of (correctly compiled) R packages and finds the links between all of the function in those namespaces.

This was particularly useful in managing the function dependencies across a large code base of R packages.

{pkgdepR} simply takes as an argument a vector of package names (that should already be on the search path) and explores how each of the functions in each of the namespaces interact. It does this in two stages:

Each defined name in a particular package’s namespace that is also a function is then decomposed. From this decomposition, if any function is found to be called within its contents, then a link is created. To properly identify distinct name calls, a search is done for a package tag preceding the name (i.e. ::). If no tag exists, then a search for an imported function is conducted. On the other hand, if the function name is already declared in the primary namespace, then it is obviously that function being called.

If a function is ambiguously called (without a package tag or not being explicitly imported from another namespace) then it is deliberately ignored in the linkage. This is because the linkage would be environment-dependent and would change depending on the contents of the search path in that particular session.

The main wrapper function for {pkgdepR} is pkgdepR::deps(...) which returns an object of class pkgdepR. An S3 method has been created for objects of class pkgdepR so they can be easily plotted. See ?pkgdepR::plot.pkgdepR for further details.

{pkgdepR} makes use of the fantastic visNetwork package for creating an interactive network visualization of the functions present in R packages.

All implemented methods for this class are:

Similarly, there can be cases where linkages are created that may not occur at run-time. Let’s add to the previous example, by adding a function bar() declared in the package namespace we are interested in.

Then, statically, it appears that foo() is calling the bar() from the namespace we are interested in. However, at run-time, we know this is not the case, as bar() is clearly defined locally and it is the local function that is called. In this instance, pkgdepR will show a link between package::foo() and package::bar() when no real run-time dependency exists.

These cases will rarely arise in normal package development, but it is important to be aware of the behaviour nonetheless.